So it's difficult to pack for 100-mile race when you have zero idea of what a 100-mile race will be like.  I looked at everyone's race checklists and tried to sort out the stuff I'd need, but of course I found myself running around like a crazy person on Thursday night before the race trying to pack and figure it all out.  After setting 6 alarms for 5:00am, I finally got to bed at midnight.  Not the optimal night prior to a 100-mile race planning, I know.

The next morning was a little better.  Got up and ate 2 packets of oatmeal, loaded the car, and headed south.  Alicia grabbed the dogs and headed south shortly thereafter in the truck.  Made it to the campground by 7:15 to check in and fill my Nathan's vest, change shoes (out of the NB Minimus Trail and into the NB MT101--a lifesaving move at Zumbro), and hit the head one last time before RD John Storkamp gathered everyone for the pre-race meeting.


It was chilly before the start, and I made the rookie mistake of being hugely overdressed.  In the picture above, I had on shorts (good call), a base t-shirt (still fine), a long-sleeved wool shirt (too much--left it at aid station #2/3), a jacket (which is surprisingly warm--also too much), a hat (didn't need it right away, ended up strapping it to the vest on lap #1 and then losing it at the beginning of lap #2, only noticing when I went to grab it when I was sweating my ass off after aid station #1 on lap #2), sunglasses (leave them in the car for trail runs through the woods), and the Nathan's vest (too much in such a well-supported race--two handhelds would have been ideal).  Jordan was better dressed than I was, and ditched the hat, gloves, and glasses at aid station #1.  Adam in the Salamon calf and arm sleeves behind us nailed it.  Meh, next time.

John sent us out right after the pre-race talk, and right away I wanted to run!  Mistake.  I didn't feel like I was pushing.  I was chatting with Jordan and we were walking up any hill taller than me.  I felt fine, but looking back, it was too much.  I ran the downhills the entire lap.  I love downhills.  Jordan pegged the term, "controlled falling," which is perfect!  But by the end, my right foot started hurting from the abuse.  I simply wasn't prepared for this much rock.  I don't know if I can run the NB MT101 here, even with the rock plate.  Just thank the lord I didn't stay in the NB Minimus Trail shoes.  I imagine that would have been disastrous.  Definitely not enough protection under the forefoot.

I ran with Jordan until Aid #2, about 10 miles in.  We were cruising.  I think we came into Aid #3 in second and third place (two front-runners took a wrong turn early and ended up back at the start).  After Aid #2 you run a short section through a lot of sand, then up, up, and up a pretty long hill with really soft footing.  That's where I said goodbye to Jordan.  I can't climb with that 130-pound burst of energy.  Gravity aids me in the downhills, and he's nice enough to wait for me on the straights, but up hills, I have zero shot at hanging with him.  I lost a few places in the 4 miles between Aid #2 and #3, but I was still moving really well and had zero notions of being towards the front anyway.  I was just trying to run comfortably.  Silly rookie mistake.  After Aid #3 though, the shit hit the fan.

I came in, refilled the Nathan's vest (which was already starting to become a pain in the ass--the thing takes too long to fill up, it's really heavy when completely full, and it takes a second to get the air out of so it doesn't slosh), and was off again through the woods alone.  Somewhere along the line, I thought, "Gee, haven't seen a flag for a bit," looked around, saw one off in the distance, and ran to it.  I followed the trail for a bit, but then it started looking familiar and I realized the flags were on the wrong side of the trail.  Yep, I was running back towards Aid #1 on the trail between Aid #1 and #2.  I cursed, turned around, and ran back towards Aid #2/3.  All told, I probably lost a mile or maybe a bit more.  Silly mistake.  Got back on the trail and headed up the epic climb out of Aid #3 with a fellow rookie (who also climbed better than I did).  At the top of that climb, I met Zach Pierce and his camera, and he took a few great pictures of me.  Thanks Zach! 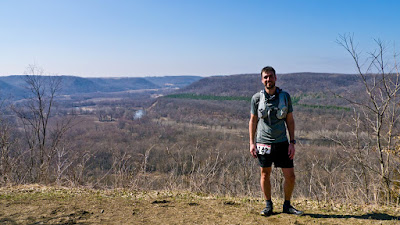 Shortly after that climb out of Aid #3, I got very familiar with a lovely little part of the course called Ant Hill.  I was hyper-conscious of trail markers after being off course earlier, so after heading down this epic hill and seeing a big tree across the trail, I started getting nervous that I was lost again.  This tree was perfect chainsaw material, but it wasn't touched or marked and I didn't see any tracks around it.  At the time, there were still only a few people in front of me.  Later, the path around was obvious, but on Lap #1, I had no idea.  I stood for a minute listening for other runners.  Nothing.  So I made the silly conservative decision to trek back up the biggest downhill on the course to the last marker and see if I'd ventured off again.  The only thing worse than venturing off course is thinking that you did and double-backing.  Ugh.  Anyway, I finished Lap #1 in the 4 1/2 hour range and felt really good about that, all things considered.

Lap #2 was hot.  I figured out that I lost my hat at Aid #1 on Lap #2, and doubled that mistake by not filling the Nathan's vest before embarking to Aid #2, misreading and misremembering the distance to Aid #3 as 3+ miles instead of the 6+ it actually is.  On the hottest part of the day, I ran out of water, which really slowed my progress.  Also, the heat of the day had turned a nice runnable portion of the course into wet and muck, and I was trying to keep my feet dry.  I graciously got a drink of water from one of the other runners who passed me on the big climb over the hill to Aid #2.  The rest of Lap #2 was pretty vanilla, and I finished in the 5 1/2 hour range.  Still feeling decent, though.

Lap #3 was headlamp time, and my dad packed up to go out with me.  I didn't know how much he was going to run with me, but I told him it wasn't really running at this point anyway.  I was really slowing down.

When we finally turned on the headlamps between Aid #1 and #2, I started getting a little motion sick at the bobbing of the light, but that eventually worked itself out.  Lap #3 was a slow one, and when dad and I finished it in 7 hours, I called it a race.

I toweled off, changed clothes, grabbed some food, and crawled into the tent for some well needed sleep.  I was beat.  Nature's call pulled me out of bed in the morning, and I welcomed the stumble to the bathroom with a quick dry-heave before laying back down for a bit.  Eventually, I got up and ate breakfast with Bob and Kathy.  Bob's a coworker who came down to camp for the night!  And I hung out until Jordan and his pacer, Ben, finished in 29 hours and change.

So, tips for next time.  Don't overdress!  Don't carry excess weight!  Eat, eat, and eat!  Make sure your feet can take the downhills in the shoes you're wearing.  And have fun!  Know that when you hit that low point in the dead of night that you'll get a second wind in the morning, and that laps #3 and #4 are the worst.  I was kicking myself for quitting after seeing everyone finish so strong.

Anyways, 100k 6 weeks off an injury isn't too bad.  I'll make a shot at Sawtooth in September, and I'll be back for Zumbro next year.
Posted by Edward Sandor at 9:16 AM