For me, it was never really a true contest. I don’t mean that I didn’t intend to go out and give it my best. It’s just that I knew enough about the course, about the event, to truly convince myself that this year, I didn’t have a shot at the whole thing. In that way, the Barkley beat me before I started. I never wrapped my head around the thought of 5 loops. 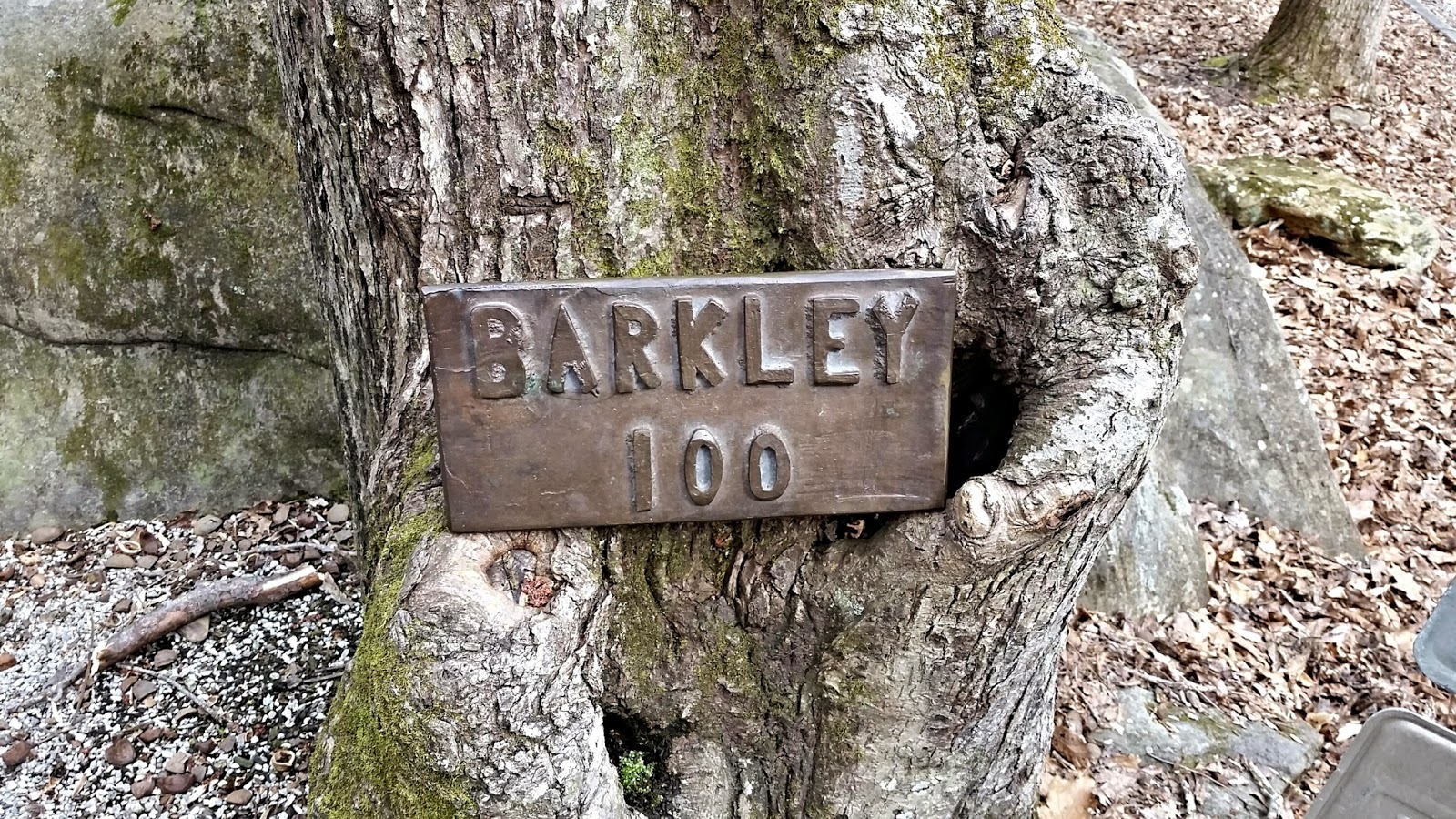 The Barkley Marathons, as we currently know it, started in 1989. It beat everybody that tried it until 1995, and then everyone again until 2001. The finishers are legendary. And each time the Barkley does not win, it gets harder.

I learned how to enter in 2012 from one of those few finishers. And no, I will not share that secret with you. I still don’t feel worthy to do so. This race is special. It took me months to scrape together the courage to submit my essay, and even longer to admit to others that I’d registered. I mean, who am I to think that I should be selected to run the Barkley? In the end I realized that it’s not my job to question whether or not I should be selected to run. That’s Laz’s job. My only my job is to decide if I’m ready to apply.

I haven’t yet figured out if I was right.

My wife, my pups, and I got to Big Cove on Thursday evening in the rain. I slept in as much as I possibly could on Friday morning as the masses started arriving, but time crawled all day.

“Remember to check your manhood at the yellow gate,” Laz joked as I checked in. “You assume I brought mine with me,” I replied. He put the map out late in the afternoon. I took pictures and marked my maps at camp. 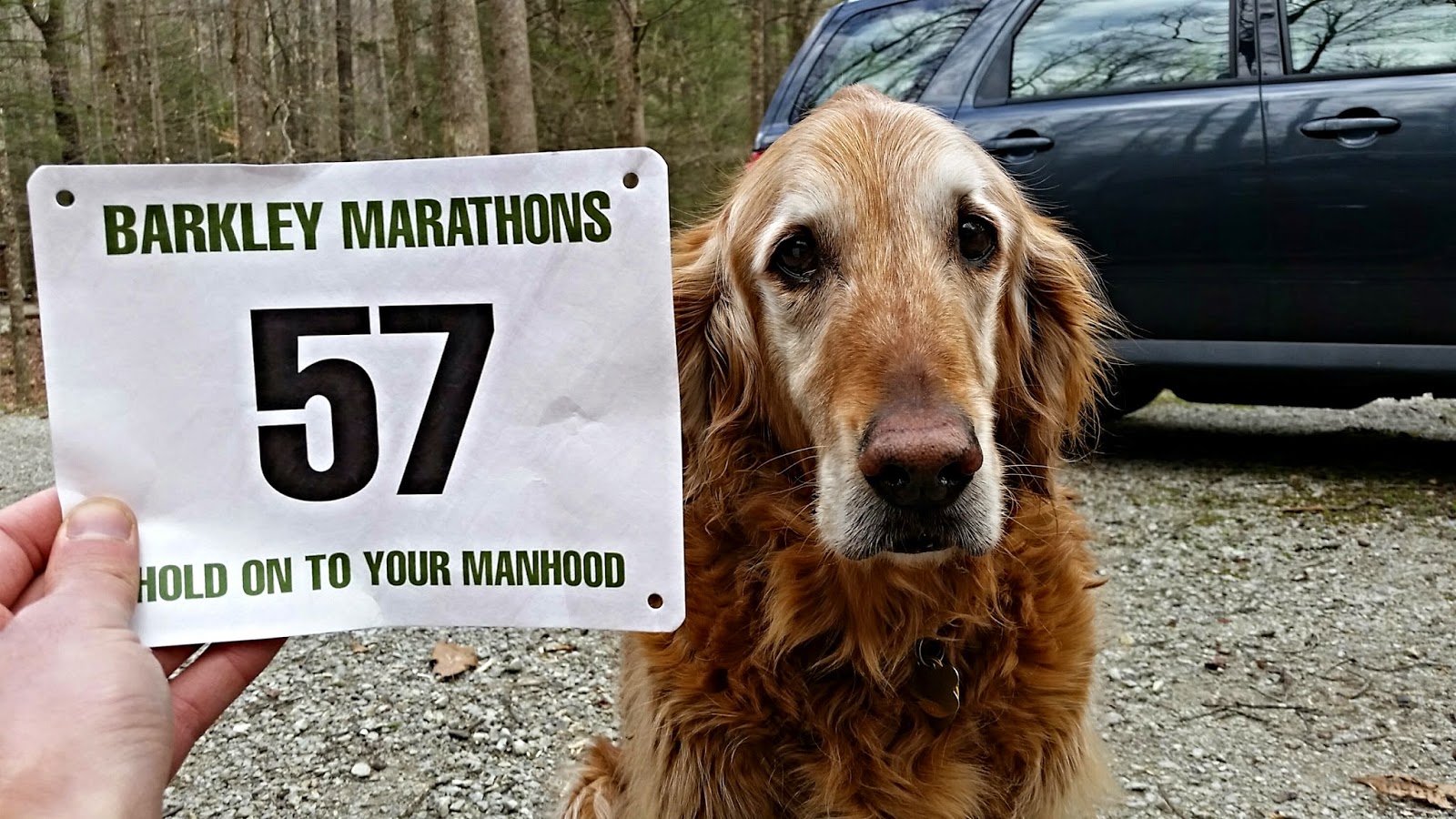 Stu Gleeman laid it out for me nicely, “Just follow the ridges.” If only it were that simple.

I slept horribly. The Barkley starts with the ceremonial lighting of an unfiltered Camel cigarette sometime between 12:01 AM and 11:59 AM Saturday morning. Only Laz and Raw Dog know the start time in advance, which Laz announces with the sound of a conch 1 hour prior. Knowing this, I was dressed, in bed, and ready to run by 9 PM Friday night. I woke out of a deep sleep at 2:59 AM with two successive identical hooting sounds. Worried that was the conch, I headed up to check. False alarm. Frozen Head’s owls apparently have quite a sense of humor. Sleep was pretty horrible from there on. Daylight came, but still no conch. Finally, at 10:22 AM, that unmistakable sound echoed through camp. T minus 60 and counting, and I was as giddy as a schoolgirl. 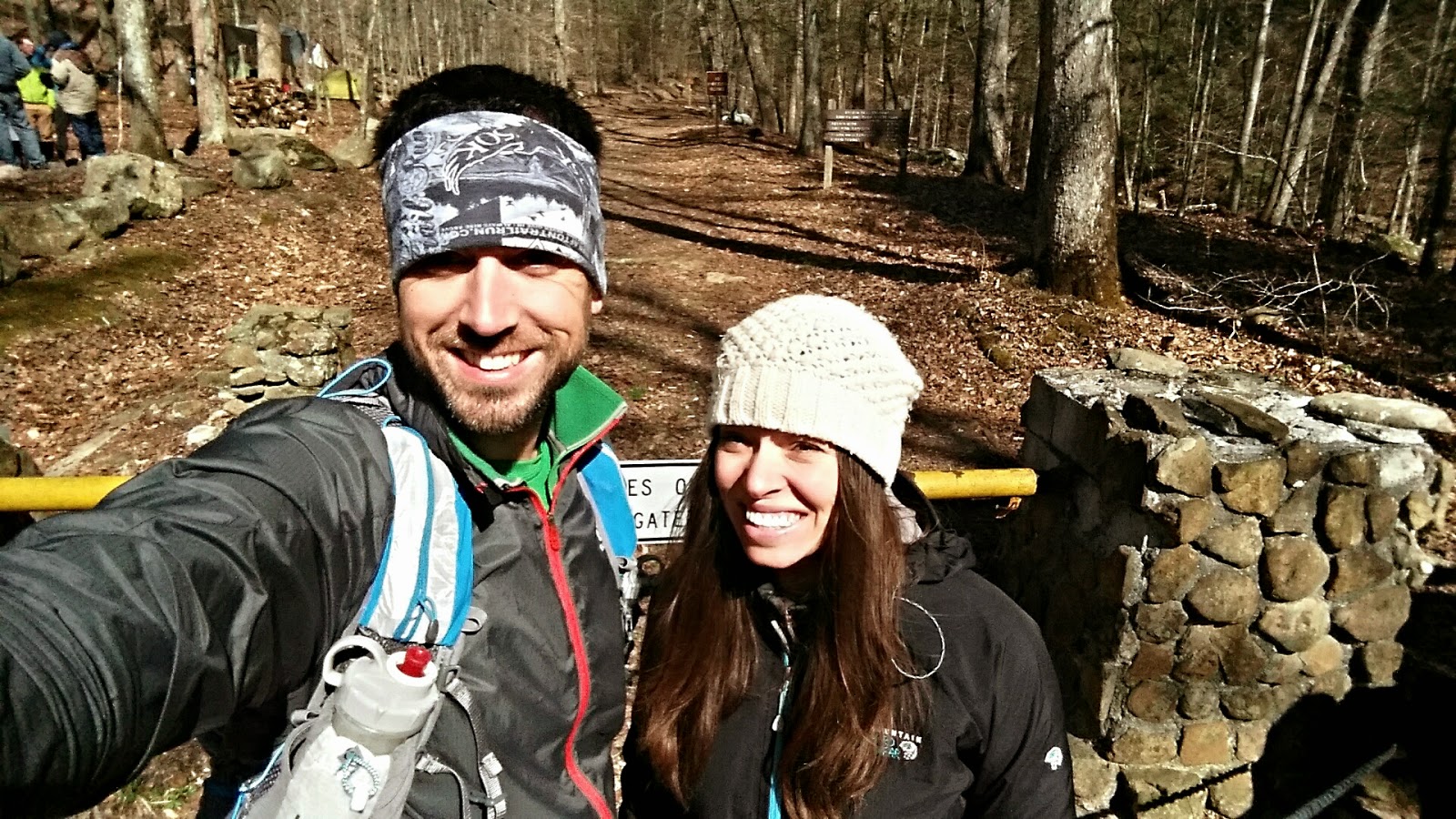 The race started, and I found myself climbing Bird Mountain behind Rob Youngren and Jamil Coury. The pace wasn’t too strenuous, and I chatted with Jamil a bit until he stopped to shed some layers. At the top of Bird, I let Jodi Isenor and two women by. Jodi asked about my last name, and we briefly chatted about our shared Hungarian heritage. I followed Jodi at a distance down to book 1, where I grabbed my page and handed the book to Jamil. Here, two groups broke off going in two vastly different directions, which prompted me to stop and consult my map and compass. As I was doing so, Hiram Rogers happened by, and I followed him East a bit before dropping off Jaque Mate Ridge. I had a compass bearing, and descended past Hiram down to the valley floor, where people were descending from all directions.

“Do you have book 2 yet?” I stupidly asked another runner, quite loudly displaying my complete lack of course awareness. “You have to climb Jury Ridge and descent before book 2,” he kindly answered. My virgin status was firmly cemented.

I slowed a bit on the candy-ass switchbacks up to Jury Ridge, letting a few runners by. At the top, I stopped to consult my map and directions with Charlie Taylor when Jodi happened by again, pointing me in the right direction, and down we went. Jodi took off a little farther East than I wanted, and Charlie and I let him go. I wouldn’t see him again until camp. Charlie and I hit the bottom of the hill too far North at the wrong creek and had to wander a bit to find book 2. As I grabbed my page and some cookies out of my pack, Frozen Ed Furtaw and four followers happened upon us. I grabbed a compass heading and started up the ridge as they grabbed their pages, but soon, Frozen Ed scampered by me up the 40% grade. I couldn’t hang with 67-year-old Scampering Ed up that grade.

Back up on the candy-ass trail, I passed Frozen Ed and his pack, caught up to Joe Kawalski, and let Rob Youngren and Jeremy Ebel run by before Son-of-a-Bitch Ditch, but every time I stopped to consult my map and directions, Frozen Ed was back on me. When Joe realized we’d gone too far on the switchbacks up to the Garden Spot, we turned around to see Frozen Ed climbing up the right spot, where he led us to book 3. Here, I made the decision to follow Frozen Ed for a while, because I simply couldn’t run and navigate faster than I could follow and learn from Frozen Ed.

Frozen Ed’s navigation to Bobcat Rock, down Leonard’s Butt Slide to book 4, and up to Fyke’s Peak Crater and book 5 was spot on. In his 19th trip on the course, Scampering Ed was one hell of a tour guide, and he straight out kicked my ass up the 80% grade on Leonard’s Butt Slide and 70% grade on Fyke’s Peak Crater. Rob Youngren also happened by again in that section, as did Jeremy Ebel, only confirming my decision to stick with Frozen Ed. 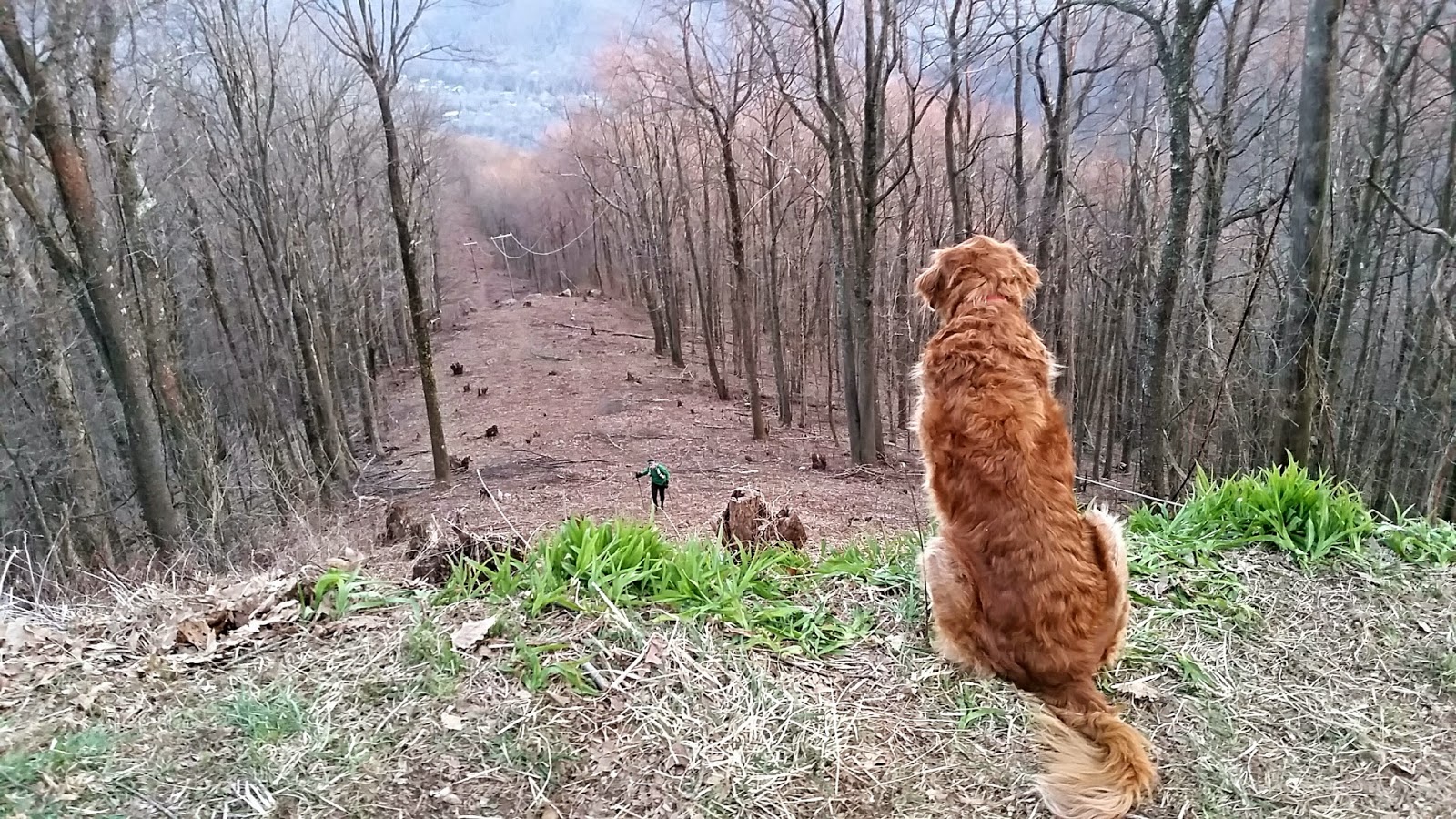 Eventually, as Jeremy went by on the ridge up to book 6, our group became 4: Frozen Ed, myself, Michelle Roy, and Chris Gkikas, and we were having a blast! The conversation was light-hearted, and we were on course and making seemingly-great time. Frozen Ed led us perfectly to book 7 and to Rat Jaw, where we saw Hiram and Julian Jameson on their way down. Towards the tower, Jeremy climbed by again for the last time. Everyone beat me to the top, where Alicia and my pups were waiting. I got some kisses, filled my bottles, grabbed my page at book 8, and started down with Ed, Michelle, and Chris. 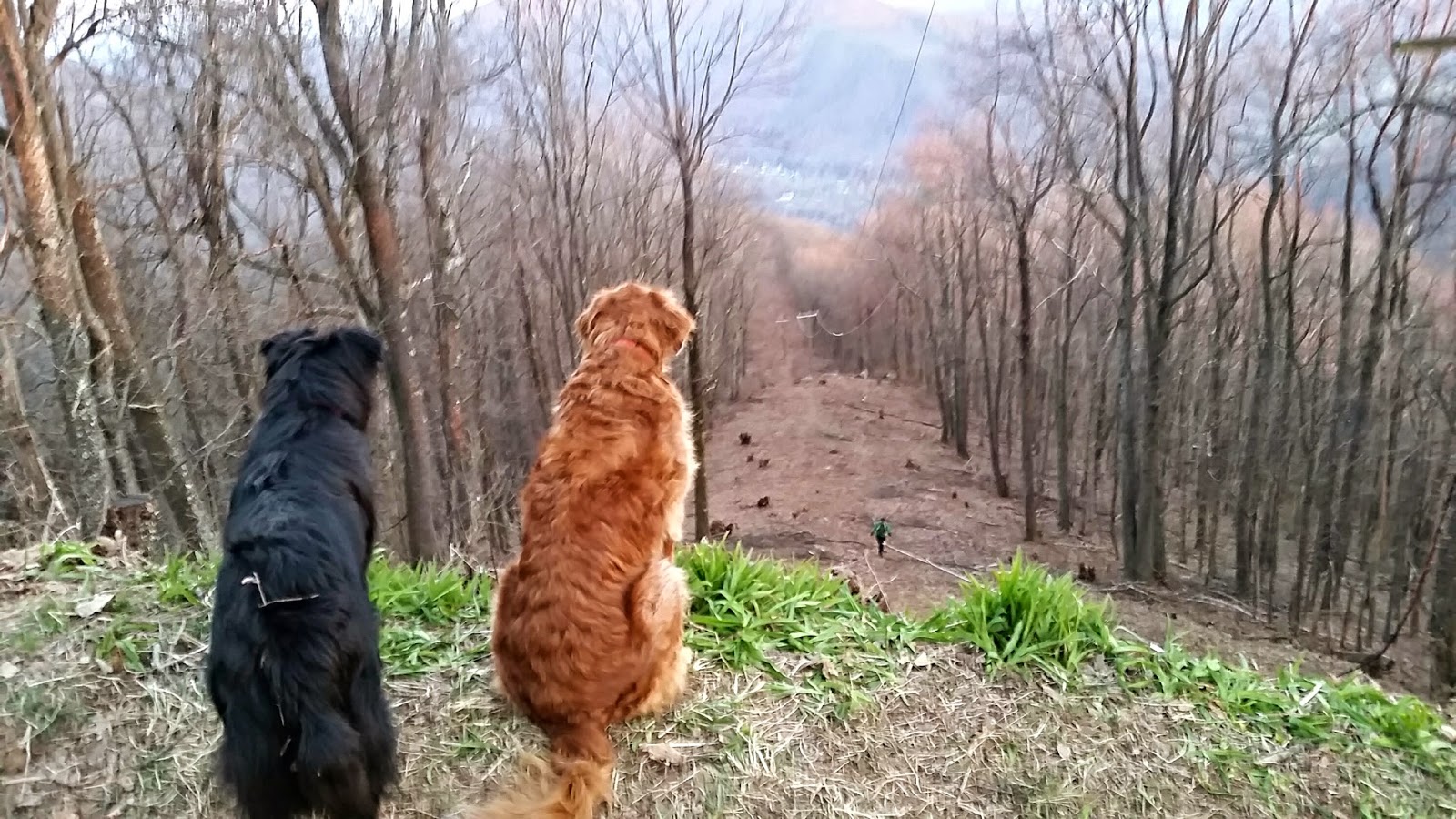 The trip under the prison and to book 9 was pretty special, and the climb up Bad Thing in the dark was something else, but Frozen Ed put us on top right next to book 10. The descent down Zipline was insane, but again, Ed nailed it, and we collected our page at the Beach Tree without issue. I finally realized, climbing up Big Hell, that even if I left Frozen Ed at the top of Chimney Top, I wasn’t going to make it to camp in 13:20. Like the others, Ed led us right to book 12 and back onto the candy-ass trail. At that point, a sub-6 min pace would have brought us to camp in time, which was well beyond me.

I quietly made peace with my failure, and continued to enjoy the hell out of the journey back to camp, where Michelle, Ed, and I snuck up on the yellow gate in the dark and collected our “Taps”. I hadn’t even earned the right to have Laz count my pages. There is no page count for failed loops at the Barkley, and I had failed. I yearned to go back out, but I could not.


In spite of my failure, I’d received the course education of a lifetime from Frozen Ed on his 19th and possibly final attempt at the Barkley. I can’t thank him enough. I even joked about providing him the standard 20% gratuity for his guidance. He laughed at the $0.32 offer, and kindly asked if I had a beer instead. It was well deserved. Even now, the only thing I can’t close my eyes and picture is a backwards turn off the candy-ass trail down to book 2. Everything else is vividly rooted in my mind. 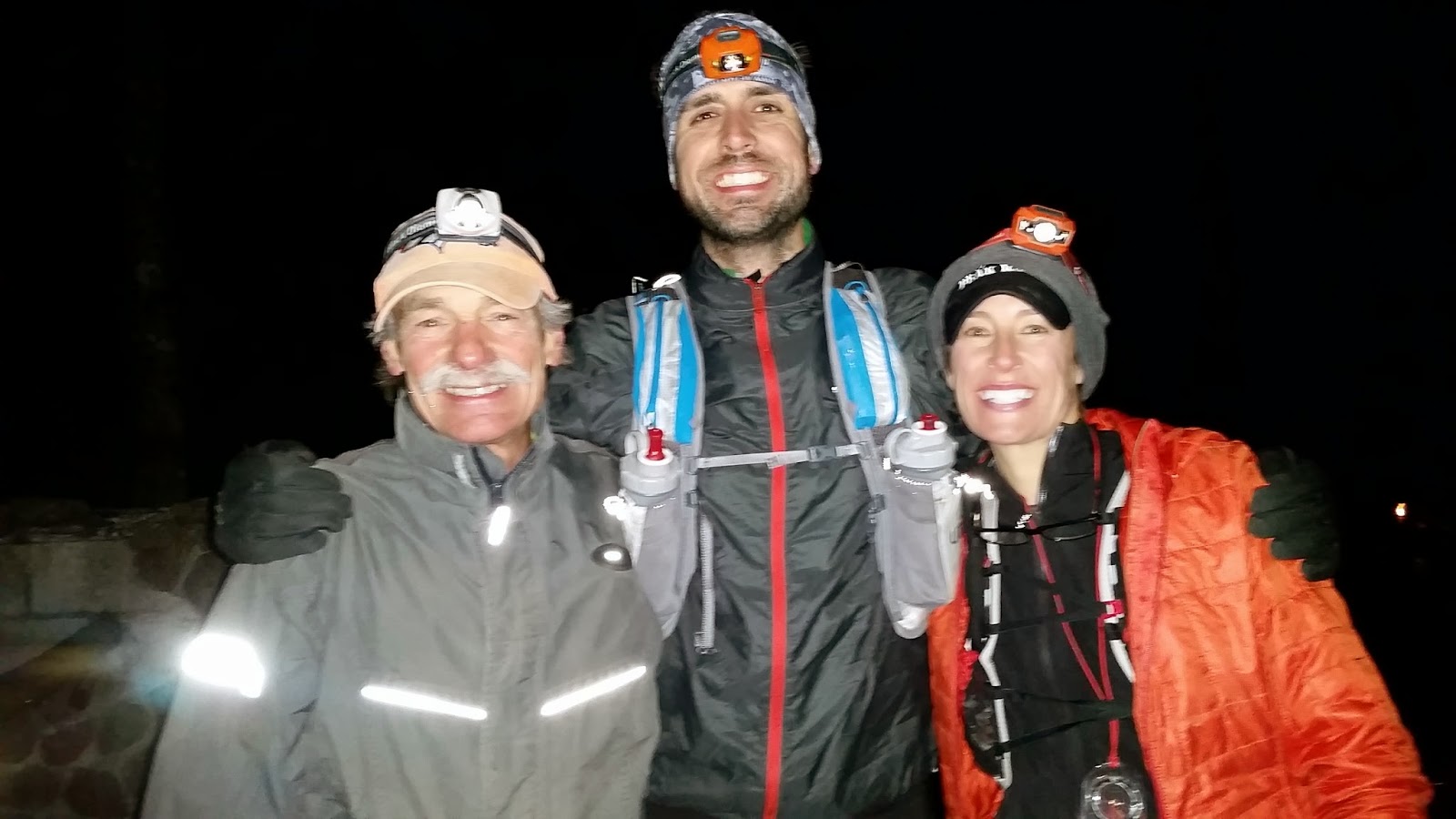 Now I’m stuck, knowing I can go faster, that I can go farther, but without the ability to do so for at least another year, but maybe two or three, or even more. This event, these people, the history, the stories, it’s all surreal, but I've left feeling incomplete. I can do more. 60 hours is not beyond me. This course, though. The climbs: 1700 feet in a mile; 1300 feet in half a mile; 2000 feet in a mile and a quarter, and none of that on “trail”. They just go on and on. It’s like nothing I’ve ever experienced. It’s bigger than anything I imagined; so much bigger. As Chris said, he hates the saying, “you have no idea.” It can be dismissive and lazy. But with the Barkley, you truly have no idea. 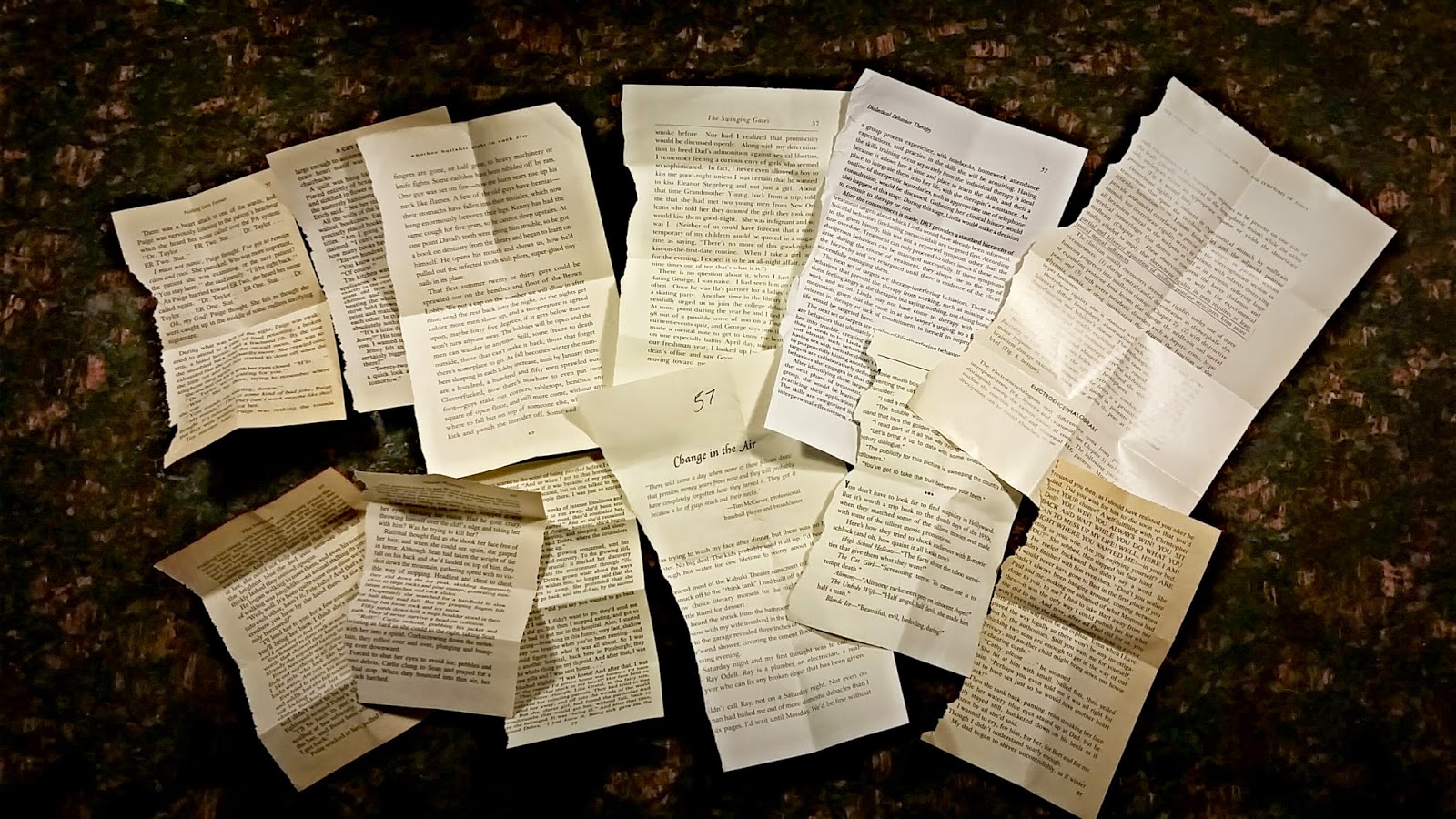 We stayed all weekend, through Tuesday morning, following the comings and goings, listening to random “Taps” being played throughout the night and next day, taking in the drama of not knowing where Jeremy Ebel was on loop 2, of Johan Steene missing on loop 3, of John Kelly and Jamil Coury in camp after their Fun Runs, of not knowing if John would go back out, then Jamil’s 21-hour loop 4. Eventually, Monday night came, and Laz’s white van disappeared from the campground. The Barkley was over, and I was sad. I didn’t want to leave, but leave we must.

I feel unfulfilled. I thought starting this event would ease my obsession, but it’s only fueled it. It’s bigger than I imagined, but the course isn’t so mysterious anymore. I have to go back. I have to try again, not because I’m sure I can finish, but because I don’t feel like I’ve given it my all. I could have gone faster. I could have gone farther. Should I have left my guide? Would I have been faster alone? I honestly don’t know. 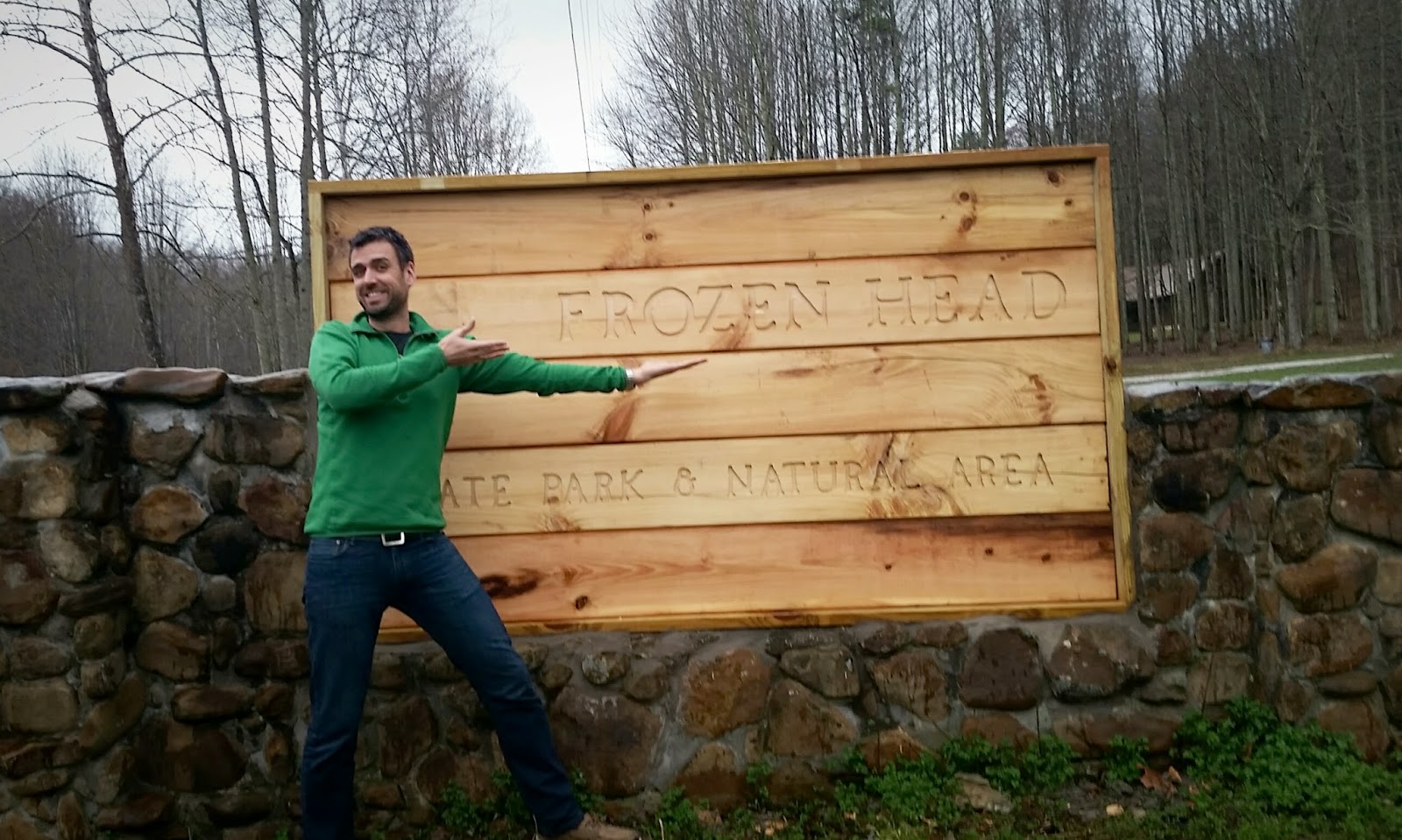 Posted by Edward Sandor at 6:39 PM